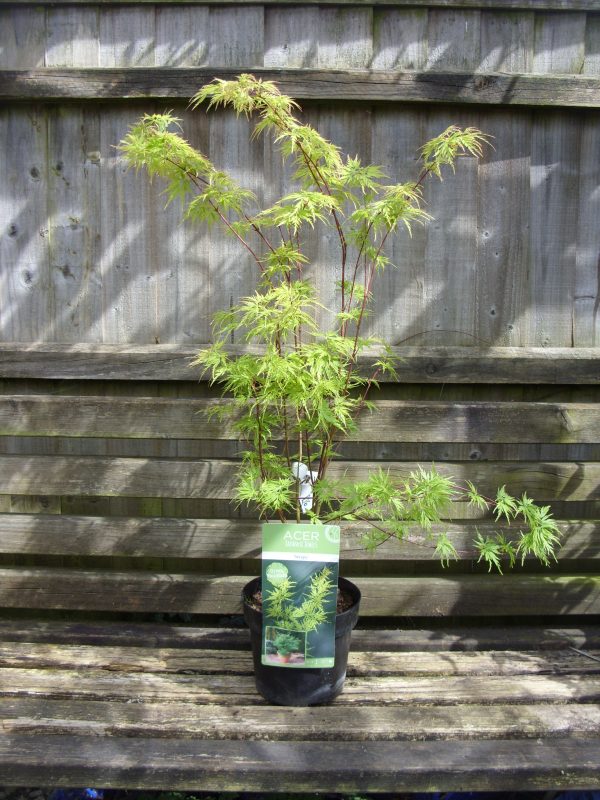 A dissected leafed Japanese Maple tree with lacy bright, lime green leavesin the spring and mid green in the summer, sometimes with a red tinge, before turning gold and red in the autumn. Acer palmatum dissectum “Seiryu” is an unusual variety, as it is the only green dissected Japanese Maple tree with an upright growth habit, rather than the usual domed or weeping forms.

A large range of garden plants, trees, topiary and more, with access to more unusual plants. Find us opposite Poundland on Lymington Market on Saturdays – weather permitting!

Buy online and collect from us

Delivery within 5 miles of Lymington, Hants

Find out how to look after your plants

You can find out more about which cookies we are using or switch them off in settings.

This website uses cookies so that we can provide you with the best user experience possible. Cookie information is stored in your browser and performs functions such as recognising you when you return to our website and helping our team to understand which sections of the website you find most interesting and useful.

Strictly necessary cookies are essential to navigate around a website and use its features. Without them, you wouldn’t be able to use basic services like registration or shopping baskets.

If you disable this cookie, we will not be able to save your preferences. This means that every time you visit this website you will need to enable or disable cookies again.

This website uses Google Analytics which collects data for statistical purposes on how visitors use a website, they don’t contain personal information such as names and email addresses, and are used to improve your user experience of a website.

We can then use this data to help improve our services.

Please enable Strictly Necessary Cookies first so that we can save your preferences!